The lovely Molly Ivors alerts us to Rudy Guiliani's latest scandal, uncovered by The Politico:

As New York mayor, Rudy Giuliani billed obscure city agencies for tens of thousands of dollars in security expenses amassed during the time when he was beginning an extramarital relationship with future wife Judith Nathan in the Hamptons, according to previously undisclosed government records.

Steve Benen thinks, a bit optimistically, I think, that this is the end of Rudy. I dunno. Maybe his prostate cancer will pop back up again, like the last time it was looking like he had to face She Who Must Not Be Named.

Actually, I think it will be the end of Rudy, but not for any reason that Steve Benen mentions. It's the end of Saint Rudy of 9/11, because he has now been replaced by Hamptons Rudy. Americans can take the financial scandal - isn't Rudy just a colorful charactuh out of the Sopranos? But the spite voters can't take Hamptons Rudy. The Hamptons is that hated place where Barbra Streisand holds fund-raisers for Hillary Clinton, attended by Steven Spielberg and other evil Hollywood Jews Liberals. Saint Rudy would never be caught dead there. But now he has. Worlds have collided. Hamptons Rudy just lost the wingnut vote.
Posted by The Kenosha Kid at 8:30 PM

At the very least, Rudy's ties to "terror sheikh Hamad bin Khalifah al-Thani should give one pause.

But then, Bush can hold hands with Prince Bandar and his dad can do business with the bin Laden family and no one blinks an eye. So what do I know.

I hope you're right about Rudy, but predicting what will happen is like trying to predict the actions of the insane, which the core Republican voter really is.

Counting any of these bastard out is like trying to kill the undead.

Pray Rudy still gets the Republican nod, because any Democratic candidate will CRUSH Rudy in the Big Game, with these two NEW scandals, added to all the OLD scandals.

if one proposes enough invasion scenarios and 'lets slaughter some brown peoples' boolyahs I don't think its possible to lose the wingnut vote.
.

Uh, being rich and hanging out with rich people are only character flaws for Democrats. Republicans are supposed to hang out in places like the Hamptons. See Bush, Dubya and Kennebunkport.

Rudy's got hit with a one-two-three punch:

1) The taxpayer-funded adultery
2) The refusal at last night's debate to cough up his last shred of decency and condemn all gun control (he got booed into the dirt for this)
3) The withdrawal of the "California Split" referendum attempt to game the Golden State's electoral votes by having them adopt a system no other state uses.

I dunno Kid. I think the "it's okay if your a Republican" law is in effect here. Sure, the excuse "everybody needs to vacation, get of his/her back" would seem to be applicable for all candidates, but it only seems to work in favor of Republicans. Same with "sloppy financial paperwork" etc. The American Press can be genuinely understanding, flexible, tolerant and compassionate - if you are a Republican. And then when called on it, they can easily fall back on the defense "You told us to be more above board, not to dwell in sleaze, and now we take the high road and you get mad, jeez!" It's the perfect Press racket... used time and again. You'll see it if a Democrat wins the Presidency as well... they'll become attack dogs and then whine, "You complained we were too soft before!"

It's the Iron Law of Press Politics. It's always okay if you are a Republican.

As much as I wish it weren't the case, this "scandal" will soon blow over. Without the Wurlitzer pumping it, and every philosophical means of explaining why "it" is so dastardly (a key component in the sleaze machine), it won't mean a thing. 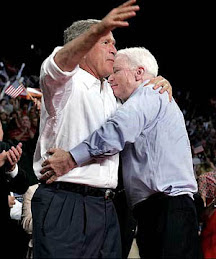